The Mekong Delta in Vietnam is one of the largest deltas in the world. The population has grown considerably, and so have agriculture and industry. In order to provide for the water needs, during the past 20 years groundwater extraction has quadrupled. This leads to problems: groundwater levels have fallen by many metres (up to as much as 20 metres) and the ground has subsided by approximately 18 centimetres. If the subsidence continues, this will unavoidably lead to floods. In order to further understand this process and to be able to direct it in the future, the knowledge available about soils and groundwater in the delta was used to develop a simulation model.

The Mekong Delta, mainly located in Vietnam (Illustration 1) is the third largest delta in the world and has more than 17 million inhabitants. The area is very fertile and the total food production provides food for almost 200 million people. The delta is at a height of on average one metre above sea level and is therefore very vulnerable to both sea-level increases and subsidence. During the past 25 years, the considerable increase in agricultural and industrial activities, urbanization and a significantly growing population have led to a substantial increase in the water and groundwater demand. Whereas at the beginning of this century, about 600,000 m3 groundwater was extracted per day, today it is in excess of 2.5 million m3 per day. 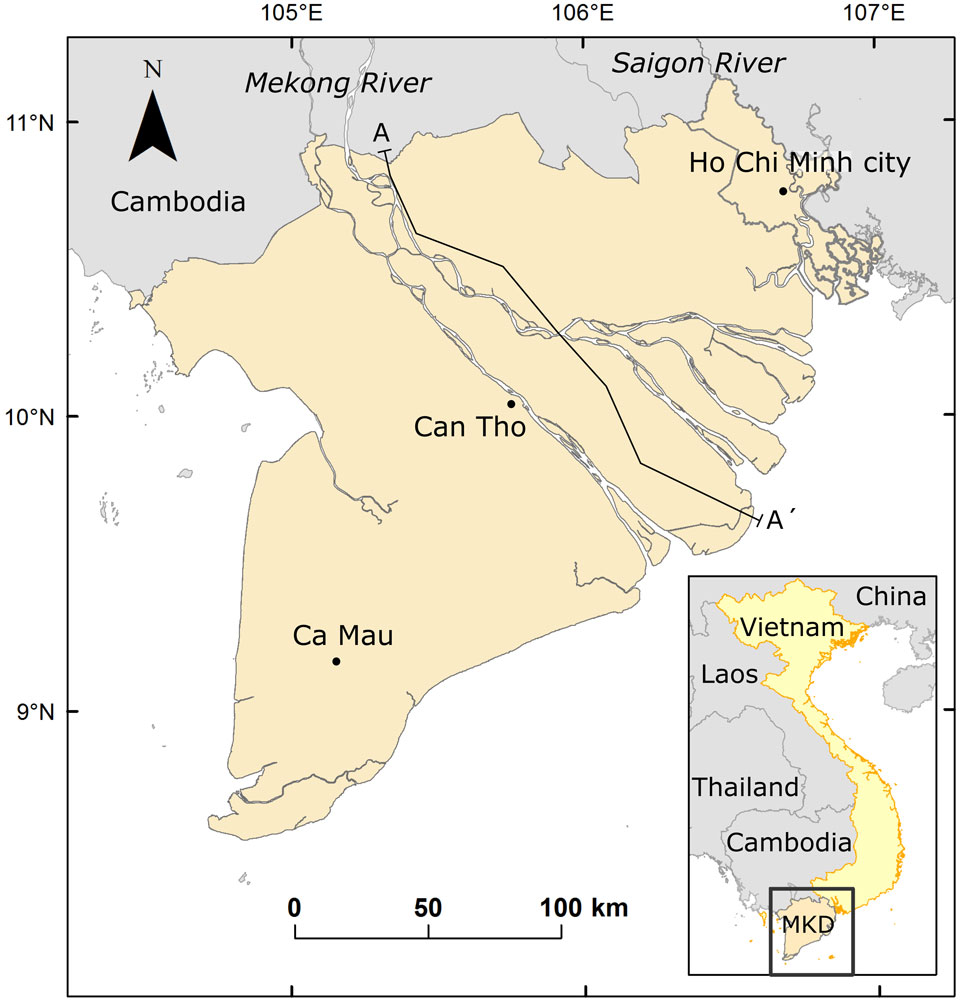 The substrate of the Mekong Delta consists of an accumulation of sandy aquifers, which are separated from each other by thick, barely permeable clay layers. In some places, the total thickness of the sediments is more than half a kilometre. Since groundwater and water in the shallow substrate are often of poor quality due to pollution and, to an increasing extent, to salinisation, more and more groundwater is extracted. When more water is pumped from an aquifer than is replenished, the water pressure decreases. As a result, the effective pressure on the matrix of the sediments increases, which can lead to the sediments in the substrate being pressed together (consolidation).
The water extraction has led to a steady decrease in the ground water pressure in almost all the aquifers, as well as in the clay layers. The sandy layers are only susceptible to this to a limited extent. On the other hand, fine-grained deposits such as clay (as well as peat) are easily consolidated. This is one of the main causes of the subsidence in the Mekong Delta.

Within the framework of the ‘Rise and Fall’ project, a Dutch-Vietnamese research project by the University of Utrecht, Deltares and TNO in collaboration with Vietnamese universities and government bodies, research is being carried out into subsidence in the Mekong Delta. One of the research objectives is to determine what influence the increase in groundwater extraction during the past 25 years has had on subsidence.
In order to answer this question, a new 3D hydrogeological computer model was developed on the basis of hydrological, geological and geotechnical data sets. The majority of these data are from the Division of Water Resources Planning and Investigation of the South of Vietnam (DWRPIS), a government body that is part of the Vietnamese Ministry of Natural Resources and Environment. The model was made in iMOD, the open-source Deltares software based on MODFLOW for simulating groundwater flow.
First, a 3D model of the substrate was made on the basis of drill cores and geological cross-sections of the Mekong Delta. Next a hydrogeological model was built on the basis of measurements of precipitation and evaporation and amounts of surface water, including locations of extraction wells with filter depths and pumped volumes of groundwater. Using this model, the development of the groundwater level in the Mekong Delta was simulated for the period 1991-2015. The model was calibrated by comparing the results with 70 time series of groundwater level measurements spread over the delta.
The consequences for the subsidence were calculated by linking the model to a new, geotechnical iMOD module called SUB-CREEP. This module calculates subsidence by determining both the elastic and plastic distortion of the substrate due to a change in the water pressure according to the isotache method.

The effect of increasing water extractions

In the early nineties, the groundwater levels in the substrate of the Mekong Delta were practically undisturbed, but since then the amount of pumped water is many times greater than is replenished by nature. At a number of locations, the water table has fallen by more than 20 metres, for instance around cities such as Ho Chi Minh City and Ca Mau. These considerable pressure reductions have led to an increasing subsidence in the Mekong Delta (Illustration 2a). Whereas in the early nineties the average subsidence in the delta was still less than half a centimetre per year, this rate has now more than doubled. For that matter, it takes some time before the pressure reductions penetrate into the barely permeable clay layers which are the most sensitive to subsidence. As a result, the subsidence reacts with a delay to the decrease in groundwater pressure in an aquifer. 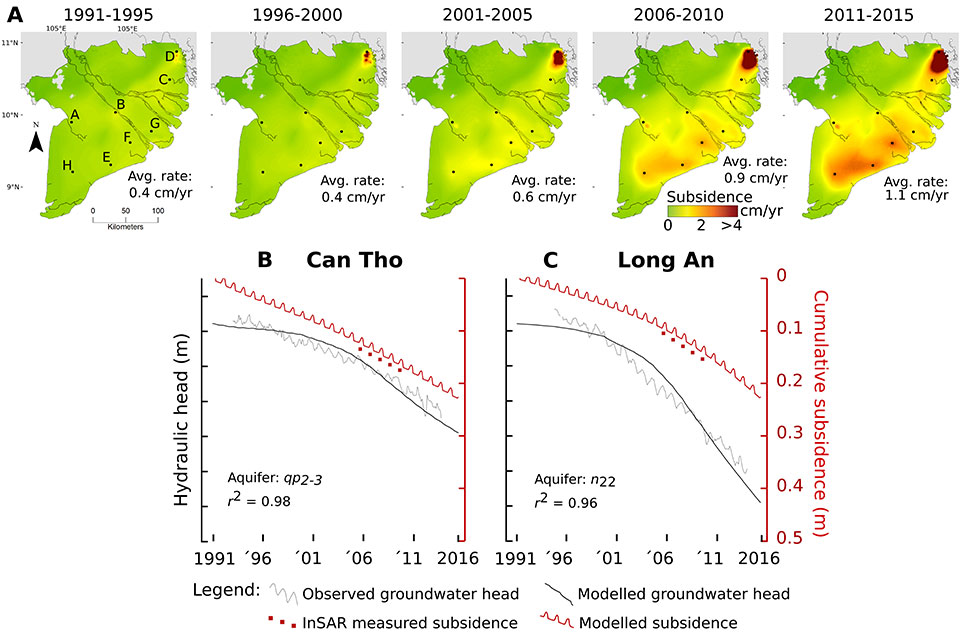 Illustrations 2b and 2c give a detailed picture of both the measured and modelled water levels and subsidence for two locations in the delta. The model appears to simulate the measured water table and subsidence rates fairly well. Illustration 3 shows the modelled total subsidence in the delta as a result of 25 years of groundwater extraction and the subsidence rate in 2015. The Mekong Delta has subsided by approximately 18 centimetres on average with local subsidence towards half a metre. The model indicates that the delta is currently subsiding by an average of 1.1. centimetre per year, with local rates of more than 2.5 centimetres per year. In the area around Ho Chi Minh City, subsidence is more than 4 centimetres per year. 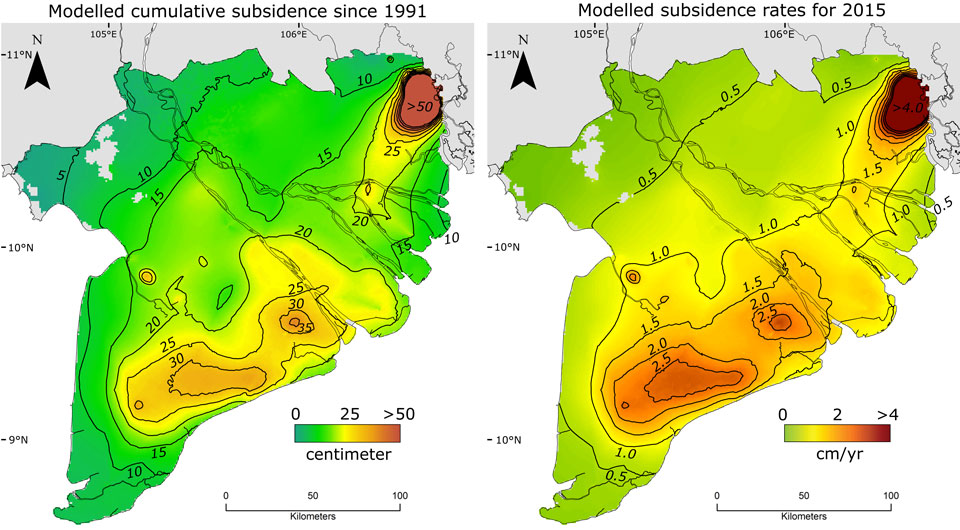 Some parts of the delta are subsiding by several centimetres per year and this rate of subsidence is increasing. The rates are much higher than the sea-level increase due to climate change (the absolute sea-level increase locally is 3 millimetres per year). These are alarming results, because due to its low location of on average 1 metre above sea level, the Mekong Delta is very sensitive to subsidence. During the past 25 years, the delta has lost about 20 percent of its total height above sea level. This problem will only increase in the near future.
The subsidence in the delta is determined by the sum of various factors: sea level increase, and subsidence due to groundwater extraction but also due to other processes, such as natural compression (compaction) and the deposit of new sediment during floods. In a natural situation, these processes are in a dynamic balance and sedimentation compensates for the subsidence. However, the amount of sediment in the Mekong river is decreasing as a result of upstream dams and the increasingly effective dyke system in the delta ensures less floods. Furthermore, the delta is now subsiding many times faster than can be compensated for by sedimentation at all.
In order to prevent the drowning of the Mekong Delta within a few decades, the groundwater use must be considerably reduced in the short term. This requires large-scale changes such as setting up alternative fresh water facilities (for instance filtered surface water). Decisive and resolute measures are necessary in order to ensure that the Mekong Delta will remain above sea level in the future.

To future scenarios for mega deltas

The modelling approach used in combination with the new subsidence model allows us to quantify the effects of groundwater extraction for large areas, in this case a mega delta. In principle, this approach can be applied to every area where groundwater is extracted, provided that enough data are known about the substrate and the hydrology (groundwater levels and extractions). In addition, these types of models offer the possibility of calculating future scenarios. As a result it will be possible to issue thorough advice, for instance to support the development of delta management strategies. This is therefore the following step in the subsidence study of the Rise and Fall project, with the objective of being able to contribute to a sustainable future for the Mekong Delta.

Link to the video abstract of this study.

During the past 25 years, the groundwater extraction in the Vietnam Mekong Delta has increased considerably as a result of the strongly growing economy and the increasing population. Since the large-scale extraction far exceeds the natural replenishment of the groundwater, everywhere in the delta the soil has subsided. In particular the clay layers between the aqueous sand layers are settling. The current rates of subsidence are up to ten times higher than the sea-level rise as a result of climate change. Using a new 3D hydrogeological model of the Mekong Delta, the groundwater flow and extraction for the past 25 years have been simulated. The model is linked to a module with which the subsidence has been calculated. The next step with this modelling approach is to generate future scenarios for the delta. 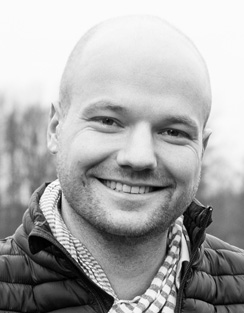